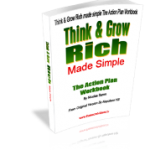 The Fear of Success is probably the most mis-understood Human Emotion!

Most of us confuse this fear with the Fear of Failure which is much easier understood.

Webster’s says Success is “favorable or prosperous termination of attempts or endeavors; the satisfactory accomplishment of something attempted; the attainment of wealth, position or the like…”

However, we define Success as “the continuous and progressive realization of our “life purpose or chief aim.”

The first and most important point we need to clarify is the difference between purpose and goals.

The dictionary defines purpose as “that which is set up as an objective to be reached or accomplished; the use for which something is intended, its reason for being; an end or aim….”

A Goal is defined as “the point set as the end of a race; an end toward which one directs is exertions, an aim or objective…”

As you can see, the two could be considered very similar.  Purpose is often referred to as the primary goal for any endeavor.  So goals then become a way of measuring how Successful we feel.

If asked, most people would state avidly that they were not afraid of Success, they would laugh and say, “Not me. I might be afraid of failure, but most certainly not of Success.” Yet most of us are very busy “successfully” failing  –  not having the things we want, not doing what we want when we want to.  If in fact we were afraid of failure we would be doing the opposite, which is Succeeding.

Normally a Fear of Failure would exist after a person feels they have reached some level of Success and then become afraid that they might lose that Success which they have achieved.

Why would anyone fear Success?  Doesn’t everyone want Success with lots of money, status, and comfort?  But what about all the responsibility that goes along with it, and all the hard work it takes to get it and then to keep it?

Most of us have the image that rich people are crooks and snobs!

This creates a double edged sword in our psychic. We want what they have materially, but don’t want to be like how we think they are.  The fact that we must come to terms with is that “most wealthy people gave before they received!” In addition, most wealthy people I know, continue to donate their time and money to worthy causes while, in many cases, providing jobs and success opportunities for others.

Therefore, if we are ever to be successful and our vision of Success includes wealth, we must change our beliefs.

There is a commonly held belief about giving that says, “It is better to give then to receive.”  That message is true because it is giving that opens our hearts and increases our ability to receive, if we let it.

It is as important to be able to receive as to give.  Many of us feel awkward receiving from those we imagine to be less fortunate than us.  When we don’t allow ourselves to receive, we prevent others from giving to us.  It is as blessed to receive as it is to give.  Receiving gives joy, satisfaction and gratitude to the give as well as to the receiver.

Ultimately, Giving and Receiving are the Same.

There is another aspect of Success that is much more subtle.  It has to do with rebellion and “getting even” with authority, particularly parents.

THE DISCIPLINE OF LAZINESS

There is a belief in called the “work ethic,” (i.e. you have to work HARD to achieve Success, to earn a living).  To the degree that you believe in hard work = Success, it is necessary for you to work hard and expend energy to achieve your goals.  If you are willing to work hard and to change your beliefs, hard work can be transformed into enjoyable effort.

What makes any work hard is not necessarily the amount of physical energy involved in the task, but the amount of time and thought energy we put into not wanting to do the task, thinking about how hard it is and doing everything but the task itself.  Being willing to do the work and then actually doing it, puts us in present time and makes the task easier, maybe even fun!

One way to release your belief about hard work is to master living yourself while you are doing nothing (sometimes called the discipline of laziness)!   If you recall your childhood, it was most likely not okay to lie in bed and be lazy, to hang out and day dream.  We suggest that you definitely take a “lazy day” and enjoy it!

CATCH 22 OF THE SUCCESS SYNDROME

There is another element of Success which is often forgotten.  Most people think of Success as “out there”, something they need to work at achieving and bringing into their lives, as something that they do not already have.

If fact, for us to think about becoming Successful, automatically assumes that we are now “not Successful.”  If thought is creative, then we become an unsuccessful person trying to become a Success (which is a little like trying to put a square peg in a round hole?)

If we live with the thought that we are now “not a Success”, then what we do in trying to be Successful will fail, because that’s what happens to unsuccessful people.  This concept of Success is it’s own “Catch 22”.

Dare to “Claim YOUR Unlimited Potential”!

In exploring the nature of people, we have found that people would rather be right than rich, right about their thought of themselves that they are now “not Successful”.

Perhaps one of the more difficult parts of changing beliefs is that you must be willing to be wrong, to acknowledge that those old beliefs did not work for you and possibly even to make your parents “wrong” in that what they told you about the way the work is was not true or absolute.  It can and will be different for you.

The first step is acknowledging that you are already Successful!

No matter what you’ve been doing, you’ve been doing it Successfully.  You may even have been failing Successfully – in which case there is no such thing as failure.  The conclusion is that there is also no such thing as Success.  There is simply doing what you are doing and getting results.  Rather than judge these results as either Success or failure, try this process.

Look at your result, acknowledge yourself for creating it (no matter what it looks like);

At this point you can acknowledge yourself for discovering another hidden barrier to your Success.

Another example of this is the process we went through in mastering our bodies as infants. We started to do many new things Successfully, walking, crawling, talking, using a knife and a fork, etc.  (It has been said that it takes the equivalent of a college education for an infant to master eating utensils!).  Eventually these abilities were no longer looked at as Successes but merely as natural.

The game of Success again became what we don’t do or don’t have, and as soon as we do (or have), Success again is out there.  This way we are never satisfied or Successful enough to stop working at it.

Life becomes a continuous cycle of working hard to achieve another temporary Success instead of enjoying the work that we do, secure in the knowledge that we are always Successful, always good enough, and always satisfied.

Experiencing Success becomes the process of choosing what you want and knowing that you can have it and watching it manifest as a part of the process of life itself.

Dare to “Claim YOUR Unlimited Potential”!

How can you use Auto-responders to build your Business?
Money, Prosperity and Success Mindset

My chief aim in life is to achieve my own Success in the process of helping others achieve their life’s goals and dreams. "The height of our Success should be limited only by our ability to develop the Mental, Emotional, Spiritual, and Physical &, Financial Aspects of our own being!" I exist to learn and then to share. If you work with our group, I can’t promise you Success: only you can be responsible for that. However, I can promise you that if you desire our help and assistance, I will work hard to assist in your Success, because I believe that my Success depends upon helping others succeed.

All articles by: George Sims